What’s the right age to get married?

If you’re like me, you had the following drummed into your head, “First focus on your career. Once you establish yourself, then you can consider getting married.” Sounds reasonable, right? It seems logical. Let’s dig into this logical argument. So by this logic, you work on your career and once you’re high enough on the corporate ladder then you should get married. Since, you’ll be so settled in your job at this point that there will be no need for any further development and you can settle down? So once people get married, they don’t get promoted? They don’t work hard like the rest or work long hours to meet targets? They just stagnate in their positions until retirement? Is that what happens? Of course not. As far as I can work it out, the only person that benefits from you handing over the best years of your life, your undivided attention to the company, is the owner of that enterprise. A career takes a lifetime to develop, it doesn’t happen overnight. There’s this misconception that life gets easier, it doesn’t. The higher you are on that ladder, the more responsibility you have. There’s more that you are accountable for. So this idea of working on your career first is totally false. You can be married and work on your career.

Another myth that plagues this generation is the money myth. Let’s look at this argument. Apparently, getting hitched is sooooo expensive that you must wait until you’re secure in your job with a fat salary to cope. Can we be truly honest here? The majority of single people are not building wealth for their future, they are saving… zero. In fact, the cost of looking like a million bucks in the pursuit of attracting a suitable mate leaves us in more debt than we’d care to admit. So if you married straight out of high school, you guys would be starting out with nothing. You’d be starting from zero. Zero debt. Zero Assets. In contrast, you’re thirty something, and in most cases when you add up your net worth and subtract your debt, you have less than zero. You’re going to start your life together on a negative balance. Suddenly zero doesn’t seem all that bad. Can I let you in on a little secret? You’ll never have enough money.

When to get married

Am I saying that you should marry when you’re young? Not at all. In order for marriage to be successful, you need 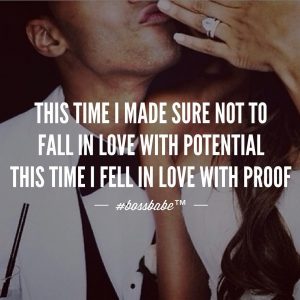 both parties to be mature in their thinking. It can’t be any other way. Marriage is not for the immature. The two of you are starting a life together. There’s certain activities that were acceptable when you were single that aren’t once you’re married.  Being single was a season, you need to be mature about it and say Goodbye to that season. Perhaps you played video games with your buddies throughout the night as a single person. That’s most likely not going to work with your wife. Perhaps you went on shopping sprees with your BFF as a single woman, there’s nothing wrong with shopping but as a couple, you have a budget. You’re joined to each other and can’t spend as you please because what you do affects both of you. That being said, there is no appropriate age to get married. You can be 45 years old and still be too immature for marriage.

Love is something that can sway even the most pessimistic person. When we find someone and start to bond with them emotionally, it’s very difficult for us to think rationally. We see what we want to see. We’re blinded by “love” or maybe it’s hormones, who knows. The person you’re with better start getting their act together on their own accord or already have it together. You need proof, not promises. You need tangible evidence, not potential that only you can see but they can’t even see in themselves. If you’re going to build with this person, they need to have it together. It’s not your job to work on them. You need a partner, not a project.

There may not be a “right” age to get married but this much is certain, the longer you wait the fewer options are available. With fewer options means you could be scraping the bottom of the barrel. There are two seasons in life when the number of potential partners are at its highest. When we’re in our early twenties and after our 60s, when partners start to pass away. That doesn’t mean you should settle but it’s something to take into consideration.

Feel free to correct me if I’m wrong. Based on my observations, dating when you’re older is like meeting someone at the airport. You’re on your own journey and you meet a fellow traveller. You guys hit it off, you have chemistry. The person seems nice and you get to know them. Then it’s time to make a decision, do I go on this journey with them? So you stand at the luggage carousel and try to guess which baggage is theirs. You hope that all they’re carrying is the hand luggage that you see. You pray that it’s not that huge bag on the carousel that no one is picking up. Some people are travelling with cooler bags. When they pull out whatever is in there, it’s as fresh as the day it went in. We ALL have baggage and the older we are, the more we seem to have. Keep in mind that the baggage isn’t the person. Some of it can be discarded. It’s up to the person to decide to let go but that’s not your decision. You need to look back at the person and decide whether you’re going to help them carry that baggage on this journey. Once again, it requires maturity on both parts.

And that’s my opinion on this topic. I understand that I’m swimming against the current on some of these issues but the more we examine what we’ve been taught, the less it makes sense. Feel free to share your opinion.