The road to “Passing It On”

Approximately four years ago, my grandparents told me about how talented my great-grandfather was. Apparently, he built puppets of some sort for events. I guess that would make my grandfather Pinocchio. Imagine my surprise to hear this story. I was in my late twenties and this was the first time I’d ever heard of it. Frankly, I never heard anything about him, other than this. Then came an unsettling realization. Once we pass on, that’s it. Few people are actually remembered. Few have the opportunity to leave a mark on history. This thought stuck at the back of my mind. Like an itch that couldn’t be scratched. How do you leave a legacy? 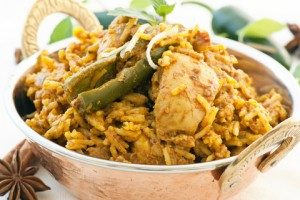 I added a section to our Church website called the Kingdom Resource Centre. It was meant to allow people to share stuff that they are interested in. Needless to say, we all get busy with life and it didn’t catch on. Some time later, our church had a workshop. Uncle John would teach the men how to cook biryani. Sort of an empowerment program so men could help their wives in the kitchen. I posted the recipe in the Kingdom Resource Centre. Much to my surprise, the recipe received far more comments from visitors than any of the other posts. I made a mental note of this but didn’t give it any further thought.

One day, while enjoying every Indian family’s favourite pastime, watching the Food Network and complaining about how it’s cooked. You know what I mean, we all love watching Jamie Oliver but the stuff he cooks is a little too out there for us. Then it clicked and the idea of a cooking show was born. A show that will allow people to leave a culinary legacy for the next generation. A way for your talent to transcend your life.

The devil is in the details

As novel as the idea seemed, it didn’t take much research for reality to set in. The equipment wasn’t cheap. Even if we did get the equipment, we would need a kitchen. Most kitchen counters face the wall. We would need a counter that faced outward, was large enough to accommodate the equipment and cooks without feeling cramped and have enough space to accommodate the cameras, lights and sound equipment. Where on earth would we find such a kitchen? Where would the money come from to build a set? It’s hard enough to get a loan for your startup business. No one is going to lend you money for a cooking show.

The church decided that they were going to renovate and also update the equipment. To be honest, it was long overdue. I had attempted to record a few sermons and Sunday school lessons with a camcorder previously. Trying to be faithful with the current resources that were available. This led to dismal failures, either the battery didn’t last or the sound was horrific. We were given a budget to get new equipment and we purchased the lighting and camera. The show was a distant thought at this point.

While the church was undergoing renovations, someone had the idea of adding a nook where people could make coffee. When I saw the brickwork, I thought it was a nice idea and would give a coffee shop feel to the place but when I saw the counter fitted, it dawned on me… “Oh my goodness! It’s the set!”, I was floored. God had provided the means to film the Show. I had mentioned the idea to people over the years but this wasn’t something that I was praying for fervently.

Build it and they will come…

Still just a shell…. It wasn’t much to look at. Reena Govender helps a lot with the maintenance of the Church. When there’s a leak or other facility related issue, Reena and others sacrifice their time to sort it out. Reena and I discussed camera angles and what needed to be done to transform it into the set you now see on “Passing it on”. Reena turned the nook into a kitchen. A set for the show. Granted, it still needs work but perfection is a thief of progress and we needed to get started. Improvement is incremental.

Many are the plans in a man’s heart 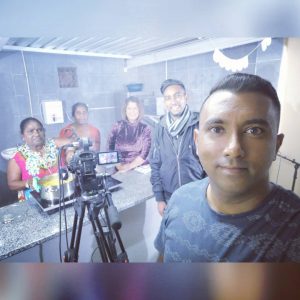 We needed something that could be stored away. I did some browsing and found a hot plate in Makro that would work. Two plates, including pots which were small but it was within budget. So I got the go ahead to buy it. When I get there, a day or two later, no stock. I was so frustrated. You know that feeling when you just start to fuss and moan internally. I had to keep telling myself that maybe there’s a good reason for this setback. Maybe God has a plan, just calm down. So I fill in the form for them to notify me when stock arrives. As I leave, I notice Hirsch’s and say to myself, “Oh well, you’re in the area, just check with them.”
The salesperson helps me, shows me a stove. A better unit but obviously out of budget. She asks me why I need it so I tell her about the project. She then leads me to another section of the store. She pulls out a 2 plate, induction stove. It’s on special and the last one in stock. She says that this unit must have been waiting for me. Then she tells me that she’s also a child of God, a follower of Christ. I was able to get the induction stove and decent sized pots within budget. I was simply blown away.

And the host appears

Reena being her usual bubbly self with that gung-ho attitude was faithful with little, she took the idea and ran with it. She has a passion for maintaining our heritage, she even sings Tamil songs. It was apparent that given her dedication to the project and her passion for heritage. She was the ideal candidate to host, Passing it on.

So begins this journey and this was the road to what you see before you. The background to Passing it on… One recipe at a time. Leaving a culinary legacy.

Well done Clint for safely carrying the project from conception to delivery. The Lord bless with guidance and direction to raise this baby in the ways of the Lord until it reaches maturity to become a blessing.